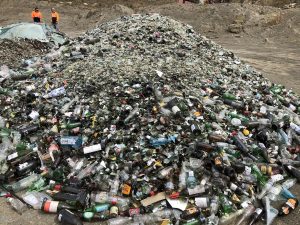 Moyne Shire was among the first councils in Australia to introduce a glass-only bin collection system. The Council made a bold decision to introduce a fourth bin for glass in September 2019, when only a handful of municipalities were considering the idea, and has provided a food and organic waste collection service since 2009, years ahead of many other municipalities.

More than 6,000 glass-only bins have been delivered to households across the shire, collecting more than 570 tonnes of glass over the past twelve months – equivalent to an average of 350 glass bottles per household.

Contamination rates for glass-only bins average less than 5%, with FOGO bins also less than5% and recycling bins at less than 12%. Glass in recycling is recorded at almost zero.

Glass collected by the kerbside collection service has been recycled and used in the making of local roads including Toolong North Road, Walsh Road and Dickson Street, Warrnambool.