A collaboration between researchers from Deakin’s Institute for Frontier Materials, GT Recycling and Godfrey Hirst, has resulted in new technology for recycling polymer textiles. Thousands of tonnes of textiles waste that would normally go to landfill annually in Australia could soon be given new life within cement footpaths, driveways and roads. 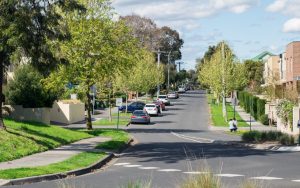 Working closely together, they were able to modify the polymers in carpet to maximise their recycling potential. This resulted in a new product, GTfibrecrete, which is used as a longer-life, lower-maintenance alternative to wire mesh as reinforcement in footpaths, gravel and road surfaces.

Established in Geelong in 1998, GT Recycling collects, sorts and processes plastic and cardboard from resource recovery centres, commercial operators and manufacturers across Victoria. The recycled plastic is given new life by local and overseas manufacturers. “There has been no carpet recycling technology on the market in Australia, but we knew there was potential, as the majority of textile wastes are polymeric materials, particularly in carpet, that could be recycled in a similar way to other plastics,” – Trevor McLean, General Manager at GT Recycling.

Godfrey Hirst was one of Australia’s first textile mills – established in 1865 – and is now Australasia’s largest carpet manufacturer. Its head office and manufacturing facility are located on a 33-hectare site in South Geelong. Disposing of textiles waste has been a challenge to the textiles industry, so this collaboration has led to the modification of the polymers in the carpets to optimise recycling potential, without affecting the quality of the carpet.